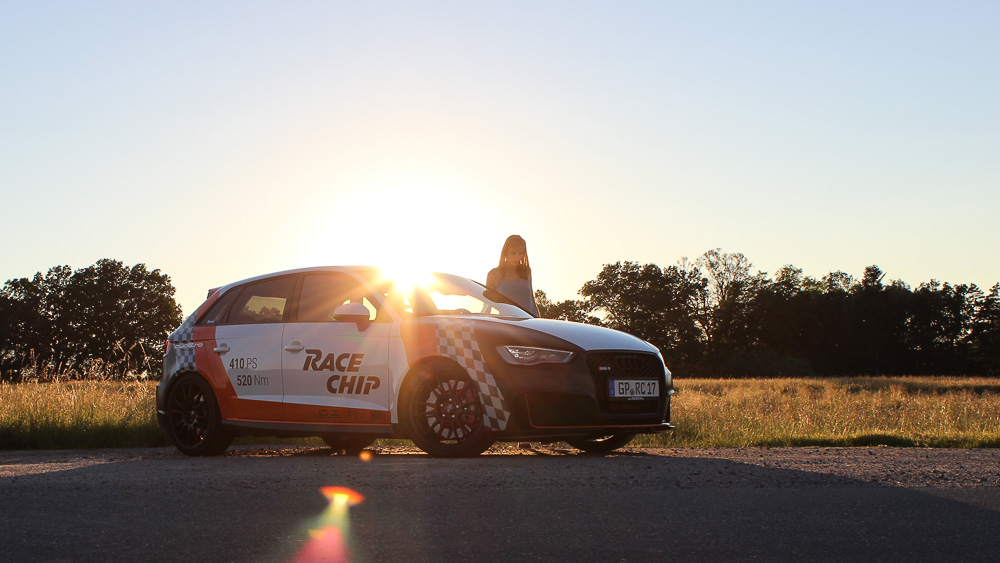 The German chip tuner RaceChip promises a power boost for the Audi RS3, with its 2.5 liter TFSI five-cylinder: from a factory performance of 367 hp and 465 Nm up to 410 hp and 520 Nm. The tuning module costs 699 euros. With its vinyl wrap, the show car looks like a work of art and RaceChip have also optimized the chassis and wheels. For the first time, the tuning software processes both analogue and digital sensor data. Is the power boost noticeable? How does it actually work? [Artikel auf Deutsch] 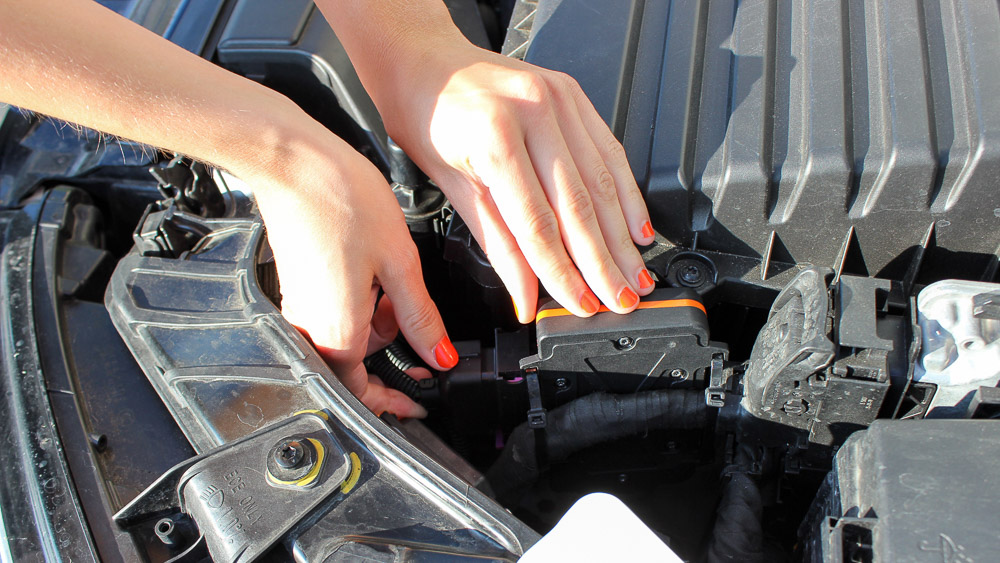 The cable harness is included and installation takes around 10 minutes

Plug and play chip-tuning module
The Audi RS3 is a very respectable sports car in its own right. Its manageable weight, powerful five-cylinder engine and Audi’s legendary Quattro all-wheel drive system already provide some extreme driving fun, straight off the factory line. But it is actually capable of a little bit more. Not by putting the engine under undue stress but rather by using clever software to exhaust the power reserves in a moderate fashion, says RaceChip. The installation of the tuning module is surprisingly simple: no irreversible changes need to be made. The RaceChip Ultimate tuning module is simply inserted between the engine sensors. The cable harness comes included. RaceChip’s newest module, the RaceChip Ultimate, is required to chip-tune the RS3. But this module also works with many other car models and any chip-tuning fan can install it by him or herself in the garage. The development of the software was a sophisticated technical challenge for the 10-member team in Göppingen, Germany, and required using both analog and digital sensor data for the first time. It took nearly 12 months and multiple testing phases to reach the production stage. The software of the RaceChip Ultimate arguably functions like a tailor-made suit for the RS3’s five-cylinder engine. 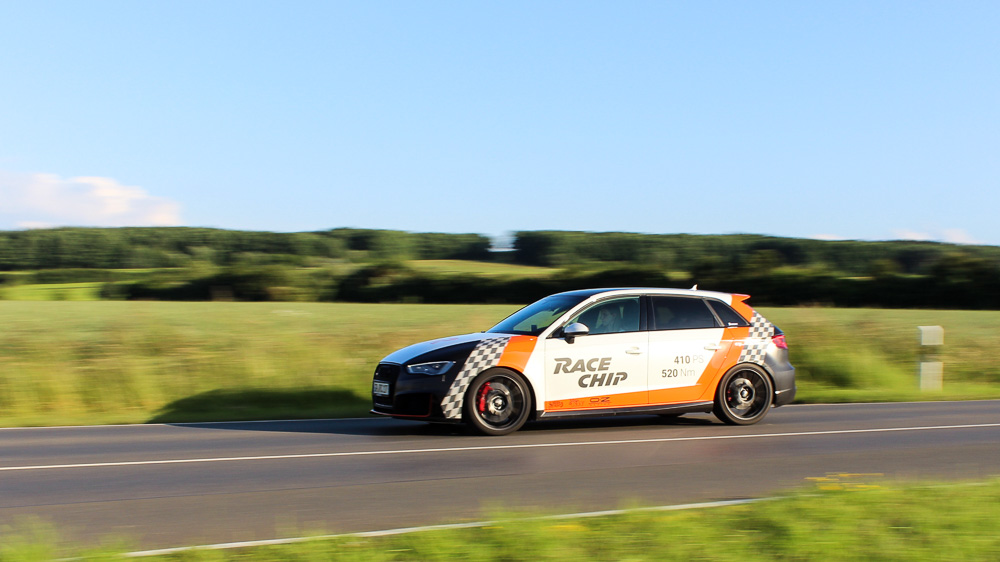 Can you feel the power boost?
In (more or less) normal driving conditions, for example in city traffic, the performance increase is barely noticeable. It gets much more exciting when the engine is challenged and the driver presses the pedal more than halfway to the metal. The tuning really comes into its own when accelerating in particular. You must drive the RS for a couple of days in both modes however to really notice the difference – with and without RaceChip. Simply unplugging the module is enough to return to factory performance. We had a bit of fun and rather amateurishly (!) timed ourselves as we repeatedly accelerated from 0 to 100 km/h. This was about 0.3 seconds faster with the chip. When executing rapid launch control starts or driving fast on country roads the (even) better performance of the RaceChip-equipped car really becomes noticeable. The tuning effect may therefore be particularly noticeable in a car that you have already driven a few months or longer at the standard factory performance. And especially in models with weaker engines. 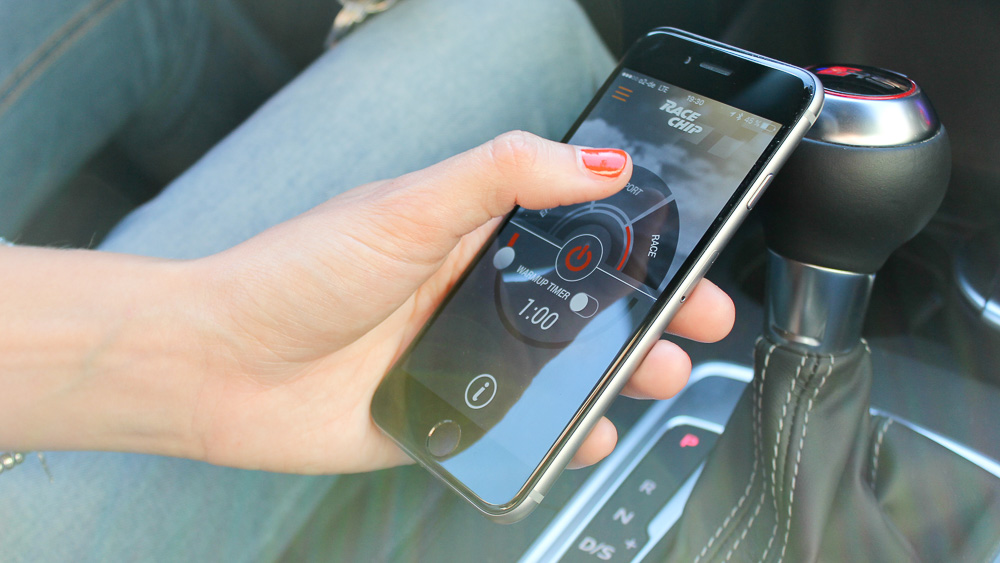 Control via Smartphone App
For a surcharge of 50 euros you can control the RaceChip Ultimate via Bluetooth on your smartphone. There are three driving modes: Efficiency, Sport and Race. Especially practical: For demonstration or comparison purposes you can turn off the tuning without having to unplug the RaceChip. A warm-up timer can also be set so that the chip tuning is, for example, only activated after 5 minutes of warm-up time. The iOS app is stable and extremely easy to use. For legal reasons the driving modes can only be changed with the engine turned off. Control via smartphone is one of the new features that is only available on the RaceChip Ultimate – and not on the previous models RaceChip One and RaceChip Pro 2. 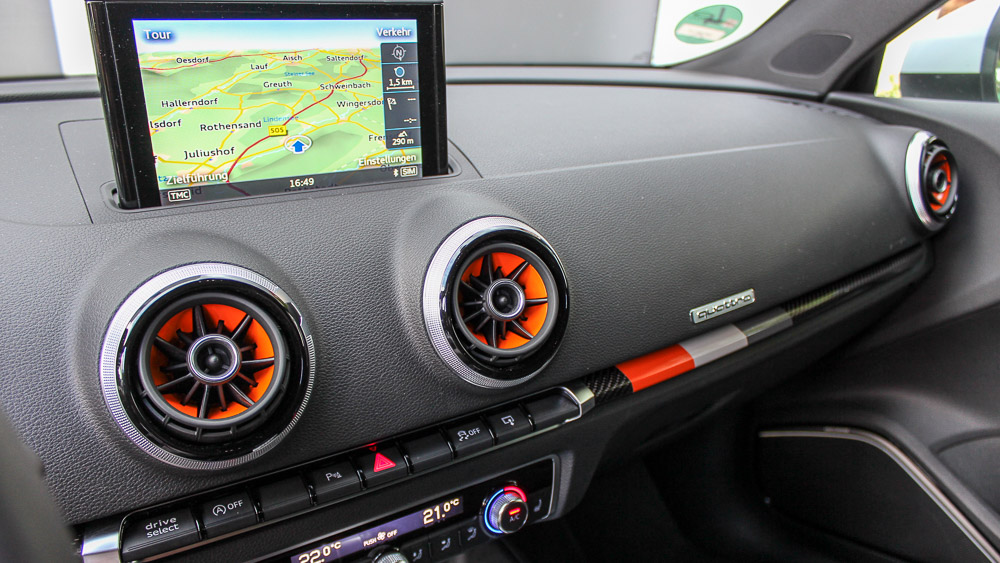 No differences in the S tronic with RaceChip
The RS3 comes exclusively with the 7-speed S tronic and this does not cause any problems for the performance enhancement. Owing to the very hefty torque of the five cylinder at full throttle, there is admittedly a torque interruption from first to second and second to third gear – but this occurs both with and without the RaceChip module activated. Otherwise, the dual-clutch transmission copes wonderfully with the enhanced performance: all gear shift points sit perfectly, as we have come to expect from the S tronic. 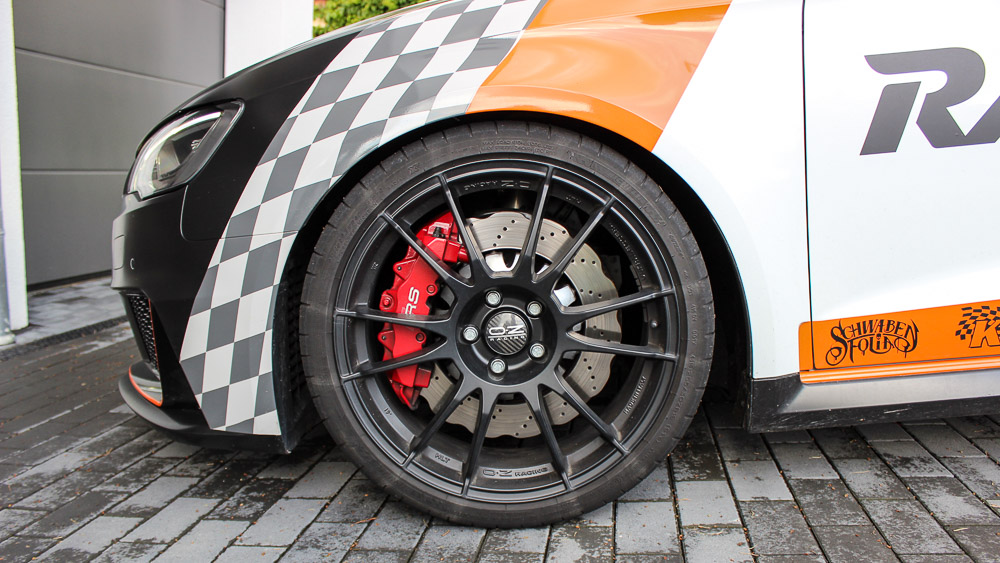 3-way Clubspot suspension, OZ wheels and Michelin Pilot Sport for ambitious road stages
The young team of RaceChip (now around 100 employees) came up itself with the design of the RS3 show car. Schwaben Folia has implemented the optics on the original white RS3 Sportback. Also unique to this sports car are the painted air vents in RaceChip-Orange. The chiptuning extra brings an extra 40 hp. RaceChip has taken it upon itself to optimize the RS3 a bit further in other ways: they have added 3-way Clubsport suspension from KW and ultra light wheels from the Italian racing professionals OZ. Michelin Pilot Sport tires are designed to ensure powerful road traction at all times. The Quattro has succeeded in more or less eradicating traction problems, even if you can still make the ESP symbol flash at high double-digit speeds, depending on the road and weather conditions. The show car definitely is most fun on the road – especially on curvy roads. The chassis here also shows its full potential. The RS3’s movement is never spongy, the steering and every other element of driving feel just right. Two flaps in the exhaust pipes provide for even more euphoria and make the 2.5 TFSI an impressive sound experience inside and out – if you select the relevant mode in Drive Select, a factory feature in the Audi RS3. 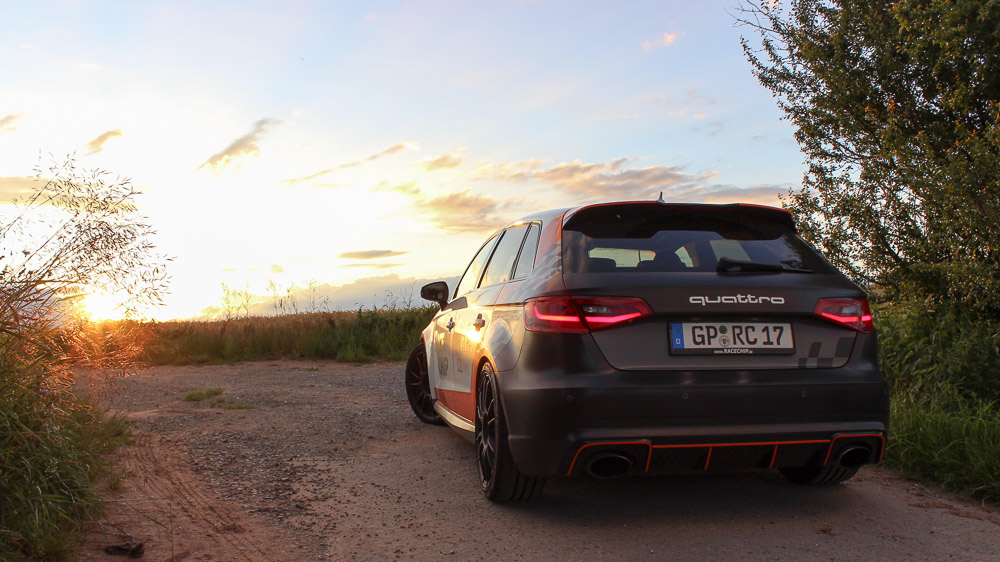 RaceChip Ultimate available for a variety of models and engines
Following earlier show cars such as a Porsche Macan Turbo (from 400 to 480 hp) or Golf R, the RS3 is a figurehead for RaceChip that is designed to demonstrate the maximum performance you can get out of a vehicle. Ultimately, the main goal of the chip tuner is not to create a supercar but rather to add a horsepower boost to everyday motors. One of the best examples is, for example, my Audi A3 1.6 TDI with 105 hp: With the latest RaceChip Ultimate, which (by design) also works for the RS3, you should be able to get an extra 31 hp and 75 Nm out of the downsized-diesel. For some models, you can find out the potential performance improvements on the RaceChip site. The price is then 499 euros and smartphone connectivity is optionally available for an extra 50 euros. A certificate of conformity for registration and an engine warranty for two years are included, provided that your vehicle is not older than five years and has not exceeded 100,000 km on the odometer. Apart from providing additional power, you should be able to reduce fuel consumption, at least for the 1.6 TDI, to at most one liter per 100 km. 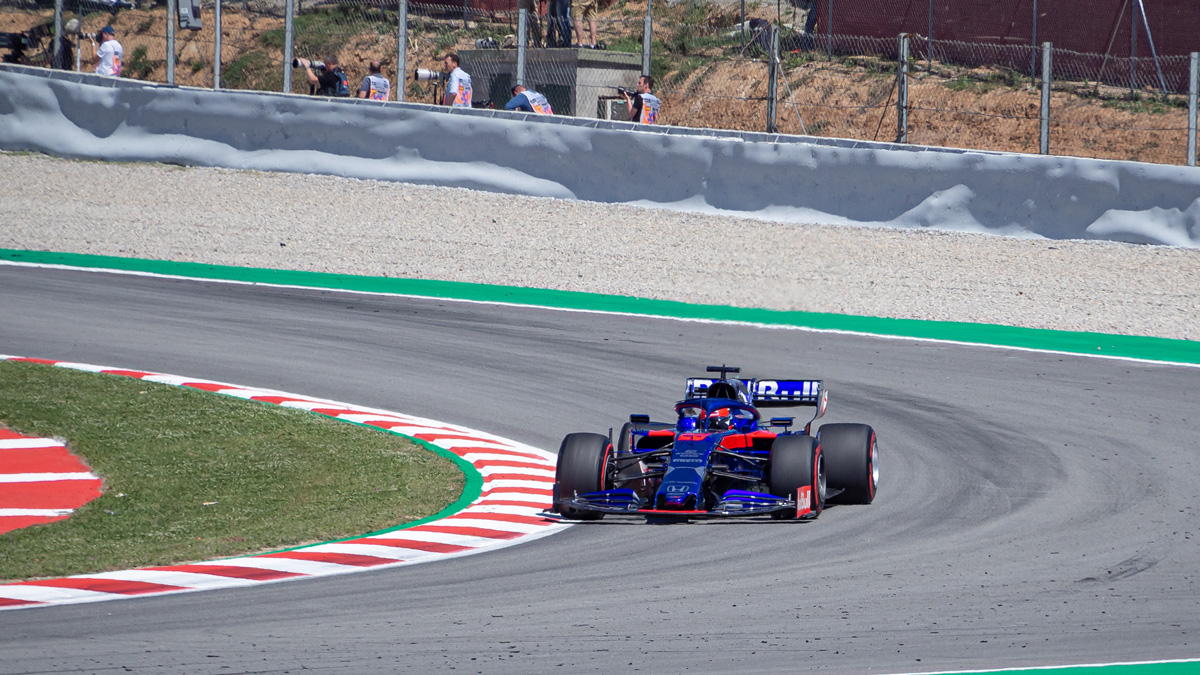 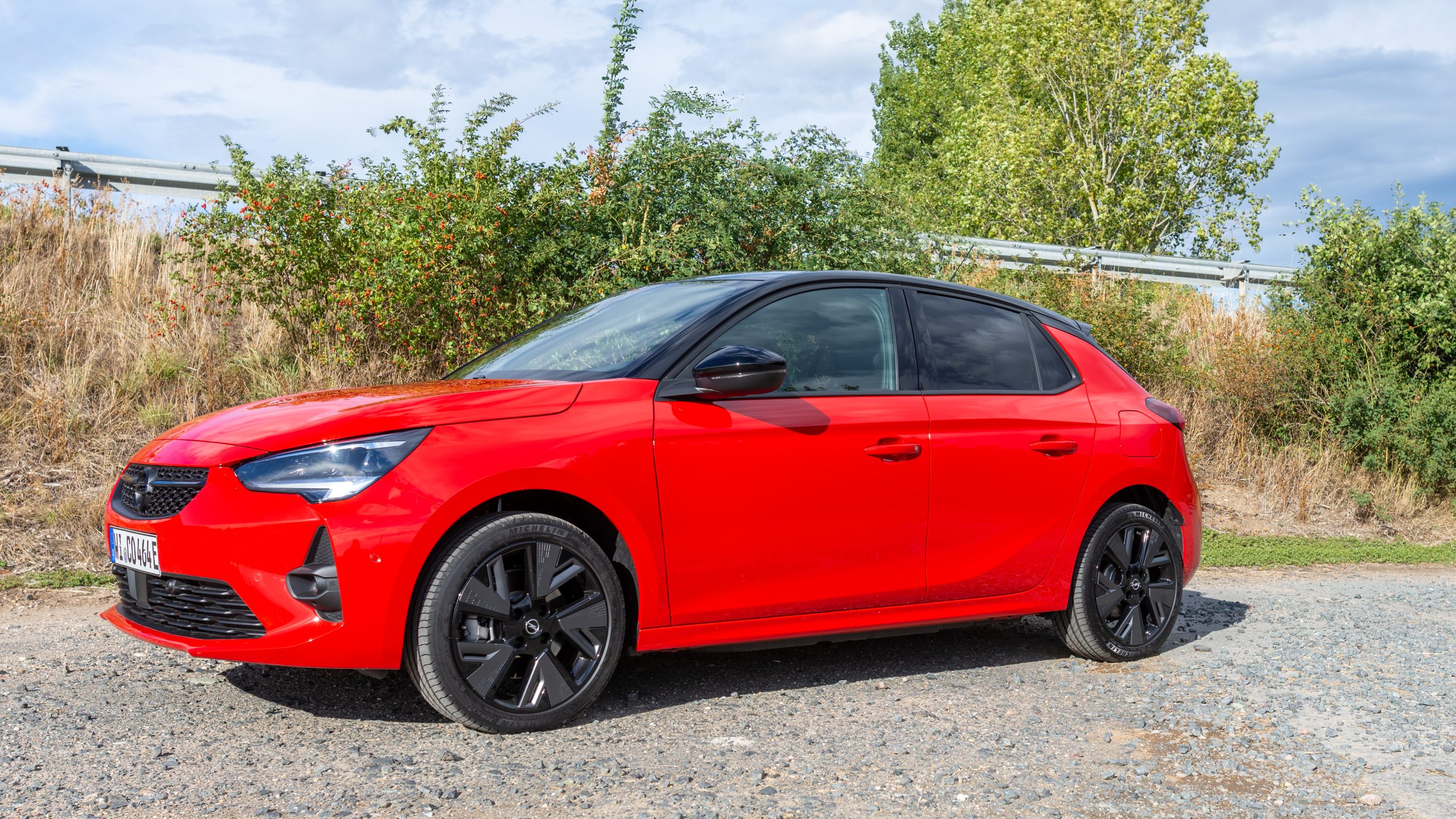 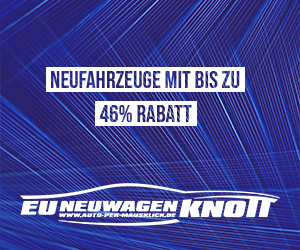